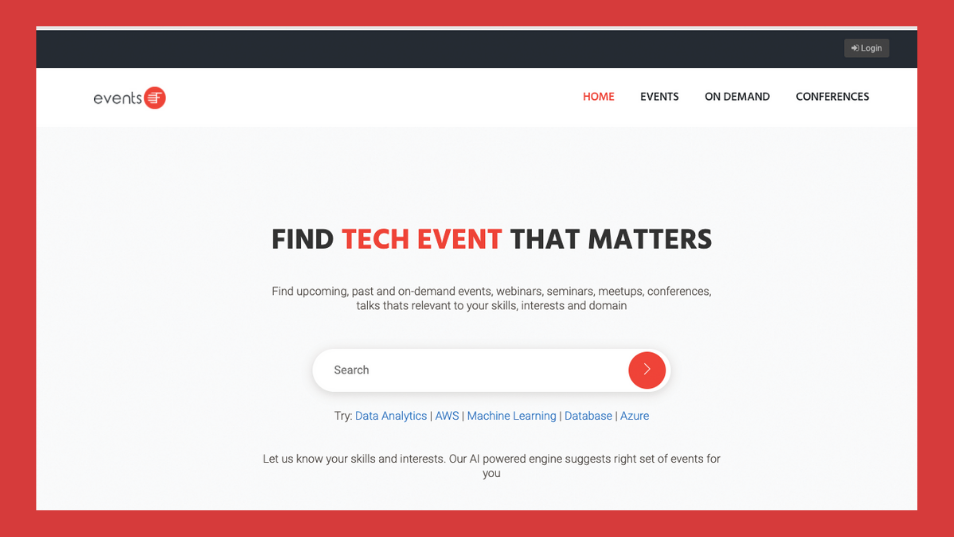 EventsDF is a platform that brings across all the tech events including offline events, webinars, and Conferences collectively into a single platform. The platform curates a large chunk of data of tech events happening all around the world into a presentable way and personalizes it for every user with their interest level and skills. The platform’s feed recommends top events both upcoming and recorded. Along with the events, it also collects relevant tweets and presents itself in the positioning of a curated and socially integrated platform for all events. The user of the platform can also search with their keywords and according to the type of events, they are looking for.

We started with the project at the MVP stage. The founder, Rakesh Ranjan, who is a YC’18 graduate and an IT industry veteran, was already pursuing an MVP approach and the set of requirements he had to develop were fitting the exact testing grounds.

The key features identified within the platform was to give the users the ability to get a recommendations/trending feed along with a searchable list where they can filter according to their needs. The users are not restricted with login to access the lists. User’s interaction with the platform and the growth of registration were tested during this phase. The UI/UX which was procured by the client himself was also key towards driving engagement from the users.

We evaluated the project and chose to use the tech stack of Python 3.x along with Django &amp; Django Rest Framework. MySQL was used as the preferred database, VueJS was used as our frontend framework and the pages were made according to the design specifications. Interestingly due to time constraints and other business decisions, we decided to opt for SQL-Full-Text-Search which would later change to a dedicated search engine. The full-text search presented us with an issue due to limitations in the ORM of MySQL. We overcame the issue by customizing the query to match the relevancy at the same time maintaining the speed needed to handle the large chunks of data. Apart from these, celery is being used to fill in some tasks asynchronously. Social logins including Google, Facebook, and LinkedIn were also integrated and Re-Captcha by Google to avoid getting spam was used in all its forms.

Since the owner was already following the MVP approach, he had most of the UI designs already prepared. We designed a few minor pages which took in the same theme. We set up a development team of 3 people, each inclined either towards backend or frontend. Agile scrum was followed for development and the tasks were defined for each sprint. Tests were carried out and eventually the product was released with MVP ready features.

We worked for 2 phases with the client and after getting a stable second phase, the client opted to further the development in his personal capacity. TheCodeWork and its team handed over the project and supported the client extensively during its transition.