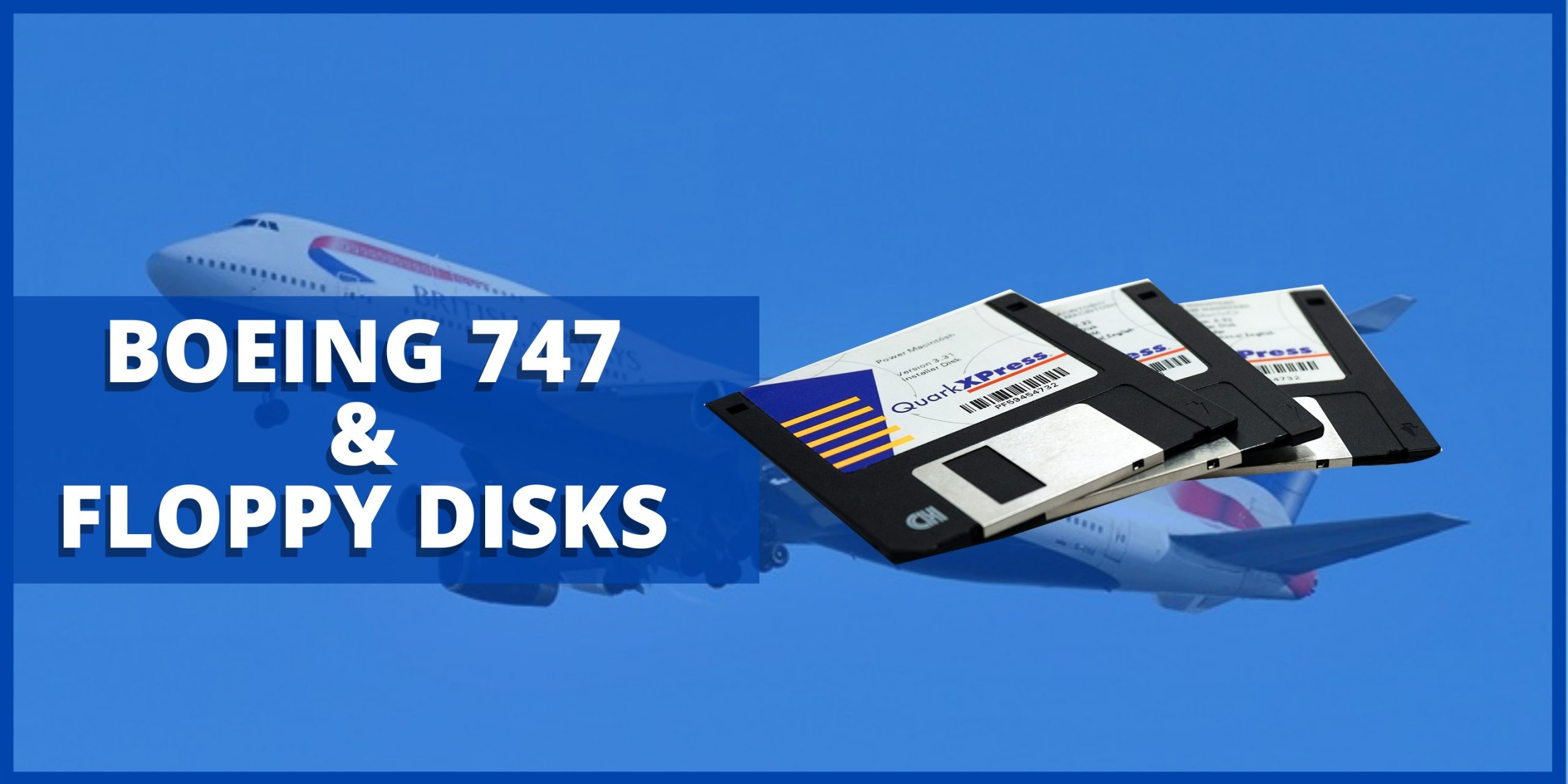 Boeing is an American international company.  The Boeing 747 is a long-range aircraft and cargo jet launched in 1989. Boeing manufactures aircraft and rockets. It also sells telecommunication tools and missiles worldwide.

However, it is in the news that the Boeing 747 still uses floppy disks. It uses 3.5-inch floppy disks to receive its software updates. The floppy disk drive loads vital navigation databases. An engineer visits every 28 days, to install the updates into the disks.

Interesting, isn’t it? With high-tech advancement around us, this raises a lot of questions.

The major question here, is why?

Why the use of floppy disks is preferred with high-tech advancement all around?

Let’s check it out.

The use of Floppy Disk

These days, IoTs and smartphones are everywhere. Even the airlines have entertainment units loaded with Wi-Fi and USB ports.

Wait, we know what you are thinking.

Why does this important navigation system still use outdated technology?

Some aviation engineers provided various reasons to answer this.

I know what you are thinking. You will get the explanation to this pointer as you read on.

Now, this is important.

You must be wondering what is navigation database how is it relevant here.

Well, the Navigation database includes routes as well as airport information. This includes the runways and departures instruments.

The database also helps to track a flight route whenever the pilots are set to start the journey.

As per the introduction, the engineers update the floppy disks every 28 days, right? Here’s why.

This 28-day update trial is in line with the updated pattern of the U.S. government supervisory organization. The Federal Aviation Administration (FAA) updates the U.S. navigation database after every 28 days.

So what’s the connection between floppy disks and security?

Here is why it is important.

Do you see how huge this is?

However, the floppy disks are not entirely safe from malware and virus attacks. Isn’t this pretty normal for external devices?

Now comes the interesting part. According to data, the aircrafts use Operating systems running on UNIX. This is not that easy to attack as the other operating systems using LINUX or windows.

Nevertheless, a breakthrough is vital for the aviation industry to replace outdated technology without risking security.

Blockchain to improve Data Security in the Aviation Industry

Blockchain is a digital record of communications happening in a peer-to-peer network. It registers a record, whenever someone installs or removes any part of the aircraft.

Not just that, it also records the performance history of the uninstalled parts. Even the name and location of the one performing the update is registered. How great is that?

These features will surely help maintain transparency within the system using modern technology.

Blockchain is a smart organization of a digital library of vital information like transactions.  This is important as transactions are the most forged activity on the internet.

Authorities say that Blockchain can secure transactions across the aviation network.

Do you want to know the best part of Blockchain in the aviation industry? Well, check this out:

With the evolution of quantum computers, they can break the coded encryption. Blockchain is a good substitute that depends on hashing rather than encryption.

See where this is going?

Blockchain keeps the data safe as quantum computers can only attack coded encryption.

In a nutshell, security is the priority everywhere. The software that runs the modern jets isn’t entirely reliable in that context.

An example of such a technological failure is the Boeing 737 Max. Certain software malfunctions resulted in two disastrous crashes of the jet.

Yes, you guessed it.

It is for the same reason why Boeing 747 still uses floppy disks. In fact, the US Defence System used the 8-inch floppy disks. They used it to coordinate the nation’s nuclear forces. It stopped doing so very recently.

Apart from that, even the International Space Station uses floppy disks. As we said, security is the priority.

However, to stay updated with modern technology, wide-scale research is going on in Blockchain technology. If this becomes successful, then, a lot of start-ups will start budding. They will explore the new technology in aviation.

Also, talking of start-ups, if you happen to be one, feel free to approach us. Follow us at TheCodework, to build an MVP for your product.

Our Content Team at TheCodeWork believes in quality content. We write everything related to startups and products at large. We publish our blog every alternate Wednesday. Subscribe to our newsletter to get notified of our awesome content.

Ready to get started?